Poll: More than Six in Ten Unhappy with Obama on Deficit

President Barack Obama met with Senate leaders yesterday to jumpstart stalled budget talks, but do voters nationwide agree with how the president is handling the federal budget deficit?

According to this McClatchy-Marist poll, 61% of voters disapprove of how the president is handling the deficit. Fewer than one-third — 31% — approve, and 8% are unsure. 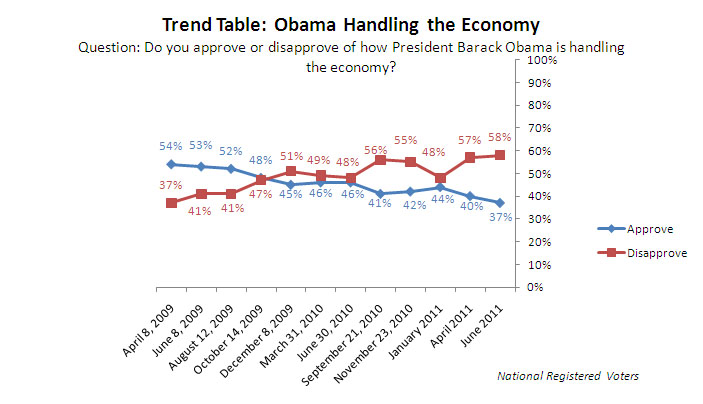 “President Obama is increasingly focusing on and is the focus of budget negotiations,” says Dr. Lee M. Miringoff, Director of The Marist College Institute for Public Opinion. “Once again, it seems the buck stops in the oval office.”

Voters are also voicing their dissatisfaction over the president’s handling of the economy. In fact, President Obama’s rating on the economy has hit an all-time low. Just 37% of registered voters nationally approve of the way the president is handling the economy while nearly six in ten — 58% — disapprove. Five percent are unsure.

When McClatchy-Marist last reported this question in April, 40% gave the president high marks on how he was dealing with the economy while 57% rated his performance as sub-par. Three percent, at the time, were unsure.

However, many voters still don’t blame President Obama for the nation’s current economic conditions. 61% report the president inherited them while 31% think they are the result of his own policies. Nine percent are unsure. Little has changed on this question since McClatchy-Marist’s previous survey. In April, 63% thought the president faced these trying economic conditions when he entered office while 30% said his policies created them. Seven percent, at the time, were unsure.

The McClatchy-Marist report can be read in its entirety by going here.