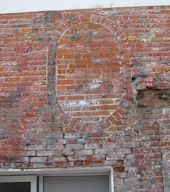 Hidden Treasure has been uncovered on the east wall of the Toward Independence, Inc. building at 87 E. Main Street in downtown Xenia, according to Toward Independence, Inc. (TII) Board Chairperson, David Springsteen. “We were excited to hear that our contractor uncovered two inlaid brick “O”s on the east side of the building where we are removing deteriorating stucco. We think the “O’s were created a century ago for Xenia’s Orpheum Theater. Preserving these ornately bricked “O”s and sharing them with the public is a great way for TII to pay homage to Xenia’s past.”

According to Catherine Kidd Wilson, Director of Greene County Historical Society and the co-chairperson of the
Downtown’s Design Committee, “the uncovered doorway with two brick O’s was possibly the side entrance to the Orpheum Theater for props and flats for the theater which opened in 1909. At that time it was called the ‘longest room in Xenia’ at 22×165 feet. Before it was the theater, that location was the Bee-Hive dry goods store.” She added that the volunteers of the Downtown Xenia Design Committee plan to include the architectural feature in a Treasure/Scavenger hunt downtown at their First Friday Festivals (which is today).

TII is currently working with Columbus Architects, Hardlines Design Company, and the City of Xenia to restore the look of 87 E. Main to more closely resemble the original turn of the last century building that housed the Orpheum. The nearly half-million dollar façade renovation of the TII buildings at 81 and 87 E. Main Street is slated for completion by November 2012 and is partially funded with Community Development Block Grant funds through a Discretionary Grant from the State of Ohio and through the Xenia Downtown Façade Loan Program. An additional five downtown properties will be renovated under the Xenia Downtown Façade Loan Program this fall.

For more information about First Friday, go to http://www.facebook.com/XeniaFirstFridays